Moving together every morning for healthier minds, bodies, and attitudes!

Home » Our Story » About Us » Apryl Krakovsky 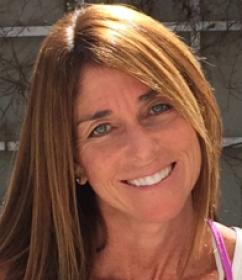 Fitness has been the cornerstone of Apryl’s emotional, mental and physical wellbeing for over 25 years. “Last picked” on the yard throughout her childhood, Apryl self-discovered the power of movement in her early-20s, when she trained for her first marathon. To date, she has run four marathons, over a dozen half-marathons, and completed three triathlons. In 2008, she further challenged her mental and physical boundaries by climbing Mt. Olympus. She found she was at her best when, or after, she was moving and made sure to begin each day with some form of fun physical activity. Today, that’s likely to be in the swimming pool or on the schoolyard leading My School in Motion®, by far her favorite morning physical activity, the inception of which was completely organic.

In June 2004, after staying home to mother her three young children, Apryl found her way back to education and her passion for teaching when her oldest child entered kindergarten at Overland Avenue Elementary School. She spent five years volunteering in the classroom, the school library, and teaching art appreciation. Her time and involvement at Overland would ultimately lead to the awareness that there was a great void in the area of physical education.

In 2009, determined to invent a fun physical education solution for the entire Overland community, Apryl launched OVERLAND IN MOTION!, the first MY SCHOOL IN MOTION!® program. She spent the next five years - 875 mornings - on the blacktop, teaching, and inspiring, the entire school community. Today, Overland in Motion! is in its ninth year.

In 2011, unable to ignore the potential broad impact of the curriculum and model she created, Apryl began dedicating her time to spreading best practices by speaking at key events, training teachers, and creating the materials and teaching resources necessary to allow new schools to replicate the My School in Motion® program. In 2013, Apryl founded My School In Motion, Inc., a California Nonprofit Public Benefit Corporation, with the hope that children across America, regardless of race or socio-economic status, will be given the opportunity to benefit from a daily dose of exercise, wellness and learning at the beginning of their school day. In the two years since the organization’s formation, My School in Motion® has expanded its reach from two schools to twenty-four.

Apryl and her My School In Motion!® program have received much attention and praise since the program’s inception, including that from First Lady Michelle Obama who recognized Apryl as “a pioneer in creating active school environments.” The program won the 2010 Gold Medal Spotlight Award from the California Governor’s Council on Physical Fitness and Sports ($10,000 Award), was the West Regional Winner of the 2012 Active Schools Acceleration Project (ASAP), Physical Activity Innovation Competition ($25,000 Award), and has been featured in the Let’s Move! Newsletter. In 2014, Apryl was honored to receive the Community Leadership Award from the President’s Council on Fitness, Sports and Nutrition. To date, Apryl reports her greatest honor of all to be the smiles and positive energy she observes on the in Motion! schoolyards.